Skip to content
Home: » Setup, Using, and Fixing » Guide To iPhone Icons And Symbols On Status Bar And Control Center

The iPhone shows icons at the very top of the screen in an area Apple calls the Status Bar, and also in the Control Center.

These symbols are designed to show you which features are enabled, or disabled on your device. You can turn off or on features using Control Center icons or in the Settings.

Some icons meaning are obvious – like Wifi or signal strength – as they have appeared on phones since they were first introduced. Other symbols can be confusing and even worrying if you don’t recognize them.

Apple has the habit of changing things regularly, so I have also included icons for older versions of iOS too. This will help you identify icons on an older iPhone running early versions of iOS.

So if you have ever asked yourself ‘what do these symbols mean on my iPhone?’ read on to find out… 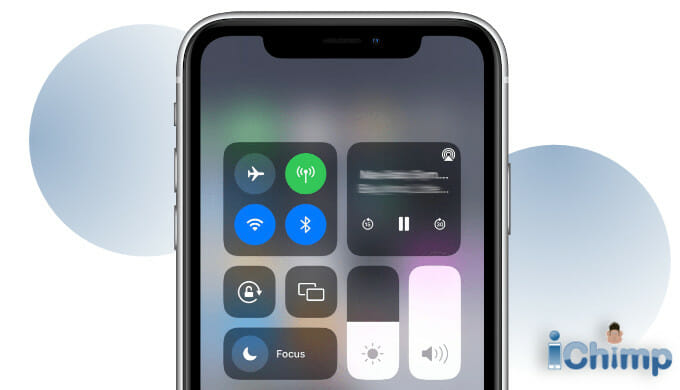 Where do you see these icons?

The iPhone information icons and symbols normally appear in the status bar.

On the iPhone 8 and earlier models, the status bar icons appear along the top edge of the screen.

On iPhone X and later, only some of the icons appear in the top-left or top-right corner of the screen on either side of the notch. Due to the notch placement not all of the symbols mentioned below appear due to the lack of space.

There are other types of icons used on Apple devices, such as the symbols on iPhone photos.

If you see an orange or green circle

This feature only appears on iOS 14 or newer.

To enhance security and provide detailed information on your device Apple has added an indicator in the status bar that tells you when your camera or microphone is switched on.

This is handy as you know when Apps take over control of these functions without your knowledge.

means the microphone is being used by an app on your iPhone .

means either the camera or the camera and the microphone are being used by an app on your iPhone.

If you see blue, green, or red bubble

On iPhone X and later, the color shows as a bubble behind the time. On iPhone 8 or earlier, the color goes all the way across the status bar. Here’s what each color means:

You’re on a call.

Your iPhone is either recording sound or your screen.

Your iPhone is either providing a Personal Hotspot or an app is actively using your location.

The battery symbol always appears in the top right with another iPhone icon next to the battery, usually signal strength or WiFi.

The iPhone call symbols meaning depends on the icon shown but normally indicates the type of cellular network in use – such as 3G, 4G or 5G. It can also show if call forwarding is enabled.

If you ever thought “what are the symbols on my iPhone?” the table shows the full list. It includes status bar icons used on iOS since the first iPhone release together with the phone symbols meaning.

There are no specific Verizon symbols on iPhone. In fact, all the icons are the same regardless of which carrier you use.

For a full list of all icons used on the iPhone including Navigation Bar and Toolbar, Tab Bar, and Home Screen Quick Action see the list of System icons.

Which iPhone models are likely to have these?

The iPhones that may have iOS 6 or earlier and will show these icons are:

This model can only be upgraded to iOS 4.2.1 and will definitely display the icons shown in the table above.

Can only be upgraded to 6.1.6 and will also definitely show the symbols above.

Shipped with iOS 4 but can be upgraded to iOS 7.1.2. So if your phone hasn’t been upgraded to the latest operating system it may show the icons above.

This model shipped with iOS 5 but can be upgraded to iOS 9. Like the iPhone 4 it may show the symbols above if it hasn’t been upgraded.

The iPhone 5 shipped with iOS 6 but can be upgraded to iOS 10. This may show the icons in the table if not updated to latest iOS.

You will see the icons listed in the leftmost column of the table.

Which iPhone models are likely to have these icons?

If you have an iPhone 5S or newer you are going to see the icons listed in the middle column of the table.

Any changes made to the icons or symbols since iOS 7?

There are no changes in the status bar symbols on the Apple iPhone between iOS 7 and iOS 12.

As mentioned above, there was a major change between iOS 6 and iOS7.

One of the interesting things to note is that the lock and play symbols were removed from the status bar when Apple redesigned iOS 7. Apart from that, the other major change is in the design which has been flattened and simplified.

Kevin is an Apple Certified Independent Technician for both iOS devices and Mac computers. He has over a decade of practical experience troubleshooting, fixing, and repairing Apple products. He has been writing about Apple products for 10 years using his vast technical expertise and in-depth Apple product knowledge to produce useful guides.